Presenting the Emotional reflection of a foodies heart, on a rendezvous with what is called the understated fruit in India, and the greens which have yet not been identified as a gourmet ingredient, and perhaps this is serendipity of sorts.

The detail of the food pleasures comes after a little introduction to the origin of the whole creation. This is At Pra Pra Prank, yes the name needs an explanation, lest it leaves you quite confused as to what does it actually mean, or is it just some funky slang…Pra  Pra signifies the existence of two. and comes from a dual existence of cuisines, Modern Asian and Modern Indian. Well supported by the Duo team with excellent hands and exceptional minds of Chef Harangad Singh and Kaustubh Haldipur. And The dual presence of seating areas as one being a cafe style seating and a well defined Bar area, where both exists together but still speaks differently by the look and feel.  as one walks through the seating area outside into the Bar area, It feels like you have crossed two restaurants, as they bear a peculiar identity of their own, and mood changes within a few steps.

The bar is Headed by the Spunky Mixologist Sanchayan Jana, who can just make some simple flavours sing…

We comfortably got ourselves seated next to the large window which makes it a happy place on any given afternoon, and this was a beautiful noon post a spell of rains with an overcast sky, so it made it altogether pleasant by the window side. 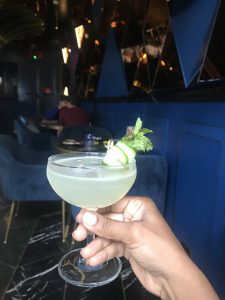 drink. For Avi, he presented  Shark Tank which was a mix of Galangal, Tequilla, Sea salt and Rosemary, and garnished with fresh Rosemary, been Blow torched at the time of service to release the fresh rosemary essential oils for olfactory appeal. Shachi and Mine were simple flavours of cucumber and mint, with just the right hint of gin, to give the minimal boozy effect.  Sparkling south side was What we had. Ambika opted for a Sangria as she is a wine person.

The chefs at Pra Par Prank Harangad and Kaustubh are known to be playful yet thoughtful about choosing bold ingredients, bringing best of flavours to the table in their unique styles, where there is an equal competition amongst the flavours ,look and the appeal of the dish.

The Idea of this particular meal was to get to understand the Special menu with Jamun and Amaranthus as Heroes and what was the idea behind choosing the special not so popular ingredients.

Both the chefs were very innovative about choosing to play on these two as the ingredients for the ongoing special monsoon menu. They have however had a bigger reason to do this. They were inspired by The young Chef’s Association who are raising a voice in support for Farmers and promoting Local Produce across the land.

How Jamun made a mark through the dishes on the special menu. 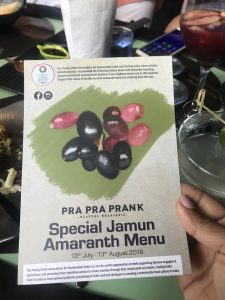 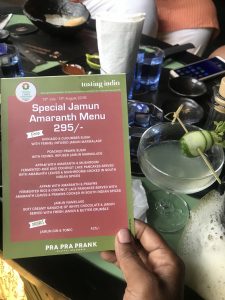 summers, with a unique combination of sour, sweet and astringent flavour profile and striking purple colour which is appealing to the eyes, and with a list of medicinal benefits to its credit, is a fruit of choice for summers. but taken these facts and its abundant existence in account, it has not been given enough weight age in gourmet industry.  Instead, the Berries from western world rule the dessert menus. Would like to mention how the chefs have taken it to their experiment table with the following dishes which just surprised all of us.

Sushi garnished with a glamorous  Jamun marmalade carrying just the right hint of fennel took sushi to another level, and I happily avoided the wasabi and pickled ginger(Gari)  served with it as I completely enjoyed the flavours and freshness lent by the Jamun Marmalade to each bite of the dish. 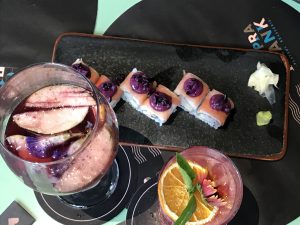 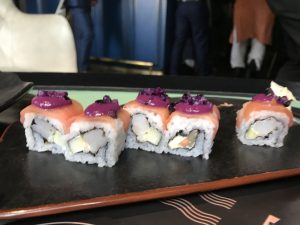 A dessert which is an ensemble of Namelake silk cream, with sweet-sour fruity flavours of Jamun or  Java Plum, from the sauce and the crunch and a bit of saltiness from the crumble, made a great dish. The hero Jamun again was shining through the dish and I ended up polishing off almost all the Jamun sauce from beneath. The reduction of the sauce is so perfect that it does not hinder with the actual flavours of Jamun, yet, lends a balance to the dish. It is very easy and the most common mistakes to make the sauce too sweet which Kaustubh with his skillful attempt with the dish has averted, by letting the actual flavours of Jamun , play. 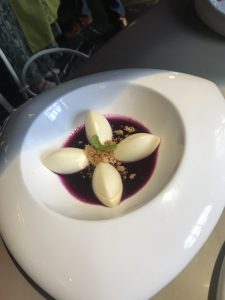 Another array of dishes came from the refreshing avatar of Amaranthus greens or our humble Chaulai Saag,  which is popular in rural India. and now gaining popularity in the health food array. Though known as super food since ever, its gaining more visibility in the health facade of the society. 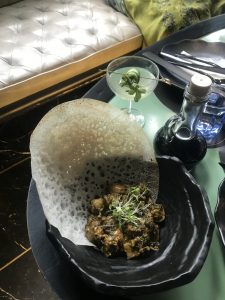 Mushroom and amarathus served with Appam 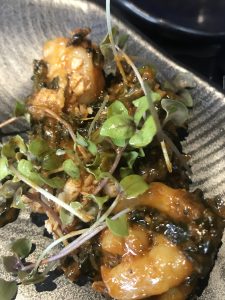 Amaranthus has a distinct flavour which chef has beautifully combined with creamy mushrooms and Prawns respectively in veg and non-veg dishes.

Appams served with Amaranthus and Mushroom or the amaranth and Prawns stood out with the creaminess in textures and bold amaranth flavour keeping the excitement high with both the dishes. These dished definitely open doors for this super food and super grain in the gourmet kitchens.

What to expect outside the special menu at Pra Pra Prank

Pra Pra Parnk is known to have a great hold on their dishes, their flavour profile which competes equally with its textures and presentations…Each dish one after the other would leave you happy with your choice and you will want to try them all. 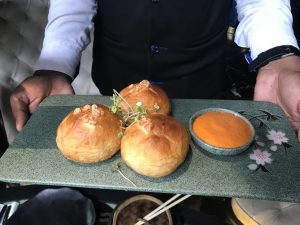 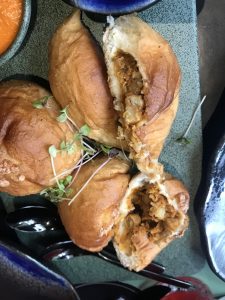 Who would have thought of having  Choley Kulchey in one bite without smearing hands? AS the menu has extensive choices from modern Indian,  Choley kulcha donuts is one dish that is in sync with the theme. Served with a carrot mouse which perfectly supports the dish with its tang from the Mango pickle, and Completes the dish in its modern presentation. The modern day Butter chicken finds a new avatar in Tomato Truffle chicken, served with sun-dried Tomatoes stuffed Parantha. 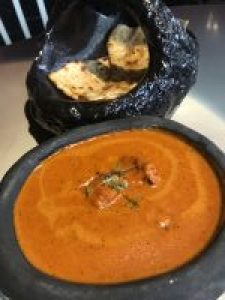 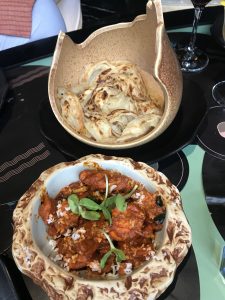 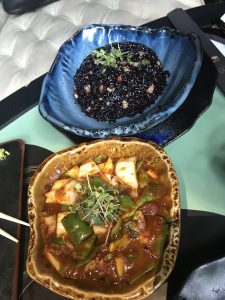 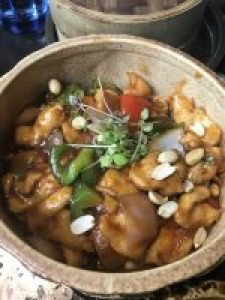 They also have more to satiate the foodie in you like their Pindi chana hummus with hummus served with Khasta kulcha ( crisp leavened bread) or the Palak Chat, are on the menu alongside the Asian appetizers. Two dishes, one from down south and the other from east of India put almost Whole of India on the menu in a smart way.

The Kozhi  Ghee Roast Chicken with flavours from down south and a modern appeal and cooked in north Indian style served with Malabar Paranthas.

Chiu Chow DumplingsThe Vegetables cooked in Chilli pepper served with black rice, where the creaminess in rice balanced by the heat from the vegetables just looked like a match made in heaven. 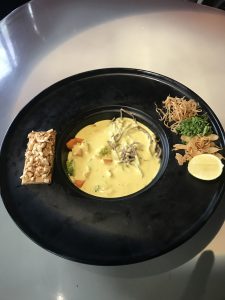 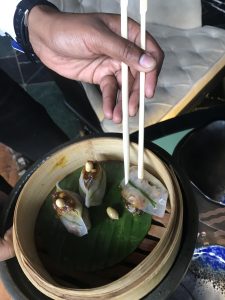 For those who might not like to be daring or confused on the experimental food, have simpler choices of Schezwan gravy with Hakka noodles, and a few more.

But believe me, anything You may choose, nothing fails to impress you on the complexity and innovation front.

At the dessert table also a choice from Japanese Cheesecake, to Tiramisu, and chocolate Ferraro Rocher Pra Pra Prank Style, or the jaggery appam in Indian tastes, the menu is extensive. 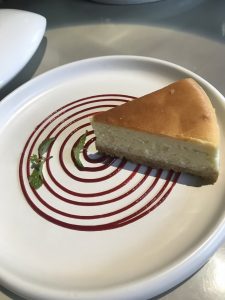 What excites you at Pra Pra Prank

The dual concept of a cafe and a classy Bar, Gives a comfort zone to almost all genre of food seekers. The menu has almost everything well thought of and planned in a way to suit again all genres of taste seekers. With a well-stocked bar to crazy talented chefs and a great menu.

When the taste lingers on your tongue and the mind thinks that u have missed some more you could have tried if the tummy allowed, then surely you have dined at a great place. Pra Pra Prank is here to stay and win over many taste buds, leading to happy hearts, and content souls.

I would like to thank again To Avininder Singh sir for his expert company. Also greatful to Home Chef Shachi and Ambika for their pleasant company and Chef Harangad and Mixologist Shayanchan for their presence and The entire team of Pra Pra Prank for creating a great concept.

I used My I phone 7 plus for the pictures. 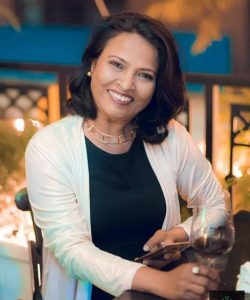